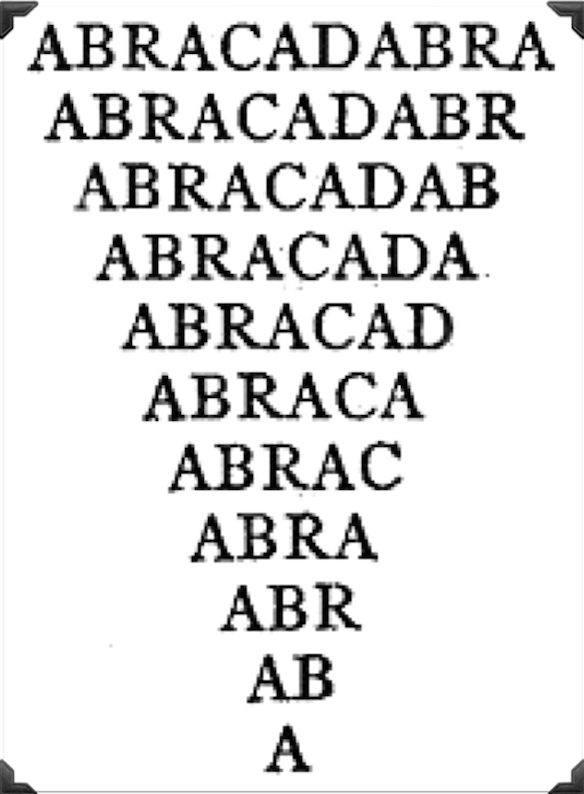 Although not really a pictorial symbol, ABRACADABRA or Abrakadabra, was used as a powerful, symbolic charm of protection since the Middle Ages.

This potent word originated from ABREG Ad HABRA, a Hebrew declaration translating to "strike dead with thy lightning," with the nine Hebrew letters repeated nine times in writing to strengthen the charm's magic.

ABRACADABRA is written in a reverse triangular pattern on paper or cloth and strung around one's neck to be cured of maladies and be safe from harm. it is said to be very effective against fever.

The Symbol That Can Be Recited

Although the word has lost its serious meaning due to the overuse of stage magicians, ABRACADABRA is older than most incantations and is an important talisman found in the Kabbalah.

Conjurers and wizards of long ago chanted this with focus, invoking a magical shield around them. They were aware of the word's protective power against any ill wishes while they are casting spells or simply putting on a show.

The special way it was written, the inverted pyramid, was to represent the negative energies progressively losing its hold on the accursed as the letters get fewer one at a time. In this sense ABREG AD HABRA may also mean "to die as with these words."

The ancient way of depicting ABRACADABRA was meant to resemble a strong whirlwind that takes away all evil intentions.

Famous during the medieval era, the symbol actually predates the history of Christ, and is associated with charms and amulets that date back to the worship of Mithras, the Sun God. Adoration of Abraxas, also a sun god, is likewise a possible origin of this magical word.

The Abracadabra symbol is used for protection from any danger, particularly one brought on by malice and sickness. Any black energy directed toward the wearer of this symbol will be gathered and diverted downwards to the earth, dissipating away from the wearer.

From the second to the third centuries of the Common Era, physicians such as the celebrated Serenus Sammonicus instructed their patients on the manner of writing the words in a cloth, in a specific repetition using the inverted pyramid style. This is to be worn as a talisman by the patient for nine consecutive days, and to be thrown into a flowing stream before the morning of the 10th day.

The wearer must have his back to the stream while he throws it overhead, so as not to accidentally attract the malaise trapped in the talisman. What's more, physicians insisted that the stream should be flowing to the east to help the ABRACADABRA talisman wash away any danger or bad intentions.

Does ABRACADABRA also translate to Father, Son and Holy Spirit?

Some historians insist that the word came from Ab, Ben, Ruach Hakodesh, which is literally the Father, the Son and the Holy Spirit. But obviously there are too many differences in the way of spelling and phonetics.

It might be closer to assume that ABRACADABRA came from the older Aramaic phrase Avda Kedavraa or Avra Kadavra, which means "what was invoked has come to pass."