The world is a seriously magical place for the ancient Chinese. Imagine having a noble animal hovering over you at the time of your birth. This mythical creature along with the element for the year bestows its Yin and Yang gifts to empower you in fulfilling your destiny. These essences are influencing you every minute, every hour, everyday. You and your birth creature are magically bound until you die. For one whole year every 12 years hence, you are given an extra-favorable time window by your guardian animal, when it makes opportunities for you to rise and reign in the world, and to keep you in line with your fate.

Chinese Astrology, or more appropriately, the 12 Chinese Zodiac symbols, represent the 12 auspicious animals that were given one year each to oversee man’s destiny. Each Chinese zodiac symbol or creature reigns for a year every 12 years in a fixed succession. They each also rule two hours of the day and a month.

This noble circle cast their unique influence over man at his time of birth as well as every area of his life from then on. The zodiac is also influencing whole countries and nations.

The Chinese system of destiny is a complex but fascinating study, magical, but in every sense, real, no-nonsense and serious. It is composed of 12 earthly branches, 10 heavenly stems and the governing five elements. In traditional Chinese astrology, one person is empowered by eight Chinese zodiac symbols. These are two animals each for a person’s hour, day, month and year of birth.

The classical philosophies of Confucius and Lao Tse were influenced by the Chinese zodiac system, which enables us to understand the unseen forces at play in life, destiny and how we interact with the world.

One of the most significant uses of the zodiac in ancient times is determining the auspiciousness of marriage between two people. The tradition allows one or both sets of parents to discontinue the planned match if the astrologer’s charts for the couple reveal ill omen or bad fortune. Better than divorce, annulment or alimony later, don’t you think?:-)

The Chinese zodiac also enjoys a following in many Southeast Asian countries as well as in Iran, Siberia, Mongolia and Turkey.

The popularity of the Chinese zodiac was evident during the reign of the famous Yellow Emperor, Huang Ti, in 2637 BCE. Emperor Huang Ti’s rule also marked the emergence of the earliest official calendar system in the world.

Holy temples in China, Tibet and certain parts of Southeast Asia reveal that Eastern astrology, including the Chinese zodiac symbols, has been depicted in literature as early as 4,000 BCE.

Yin, Yang and the Zodiac

The main objective of the Chinese Zodiac system is for man to maintain and create balance and harmony between the forces of man, heaven and earth. The I Ching or the Book of Changes declares that heaven has given man the shuffled puzzle pieces of destiny, but he must become wise and skillful enough to put them all together, decipher them and carry them out.

Each of the 12 Chinese zodiac symbols represents the harmony of both yin and yang principles, carrying with it positive and negative elements that make up our human and spiritual character. An animal’s essence is perfectly aligned with yin and yang. From new moon to new moon, each of the 12 animals casts their influences over us and our actions. This monthly cycle is the Sun Sign of Western astrology.

Yin is the negative female and receiving. Yang is the positive, male and giving. Negative here does not refer to evil forces but only to denote the opposite of the positive Yang. Both can be beneficent or harmful in the presence of an imbalance.

According to legend, the animals were classified into Yin or Yang based on the number of their toes. Even numbers are associated with Yin, and so those with even-numbered toes are classified as Yin. The Snake, having no extremities, was said to be Yin as its forked tongue signified the number 2! Along with the Snake are the Sheep, Pig, Rooster, Ox and Rabbit. The Yang animals are the Horse, Dog, Tiger, Rat, Monkey and Dragon.

Think the Chinese don't know much about the sky, stars and planets?

Chinese zodiac or astrology is widely accepted as being used before Buddhism made its mark in China. The pre-Buddhism Chinese were already avid sky watchers then, having carefully observed the movement of the planets and stars. They were aware that the planet Jupiter appeared in the sky every 12 years, beating many cultures in this area by close to a thousand years!

The ancient astronomers took notes as they observe the planets and make sense of the unusual planetary events in connection to their life and society. If a ruler in a certain region was not being honorable and responsible in his post, his people will look up at the sky one night and see the ill omen of unusually bright shooting stars.

A red or darkened sun also has significant meaning, usually related to the Emperor. An eclipse is often taken to mean that it is time for the Emperor to evaluate the role of the Empress or a major female figure in his affairs or kingdom. The Empress might have become more influential or aggressive in ruling both land and people, thereby upsetting the balance between polarities: the assertive male and receptive female, yin and yang, heaven and earth. 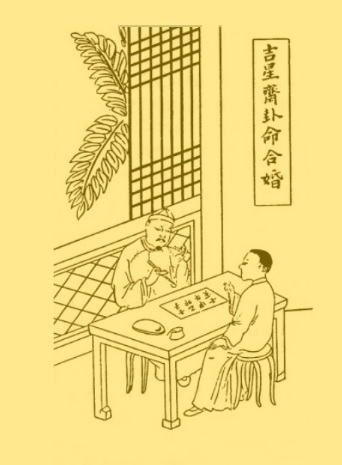 In ancient China, many of the revered immortals originated from the stars, but mankind is free from the power of the constellations that the Western astrologer relies on. In fact, they have observed that it is the other way around. Any unforeseen heavenly events, a comet or the occurrence of many shooting stars are a reflection of what is happening on earth. It could only mean that man has tipped the scale of the three forces of nature that he was tasked to maintain. When harmony between man, earth and heaven is upset, steps must be taken to restore this balance based on astrology.

I will update this page soon with links to the rest of the Chinese Zodiac symbols and how they affect and embody each of us in a seemingly magical but helpful way.

Do you know that the Chinese consider the year of your birth animal as inauspicious for you? Check out how they keep bad luck away during one's zodiac year here.

Read more about the legends of the Chinese Zodiac here.

Year of the Goat or Sheep

Return to the Symbolisms home page.