Androgyne: the Primordial Being?

Perhaps one of the most popular myths about the androgyne is Plato’s Symposium. In these dialogues, Aristophanes tells of a legend about the first earthlings, who all had two heads, two sets of arms and feet, but one spherical body. These are pairs composed of both men, both women, and a man and a woman. It also recounted that the hermaphrodite or Two-in-One had been ambitious and sought to reach the abode of the Gods. Because of this, Zeus cut the earthlings in the middle and threw each of the pair in opposite directions. 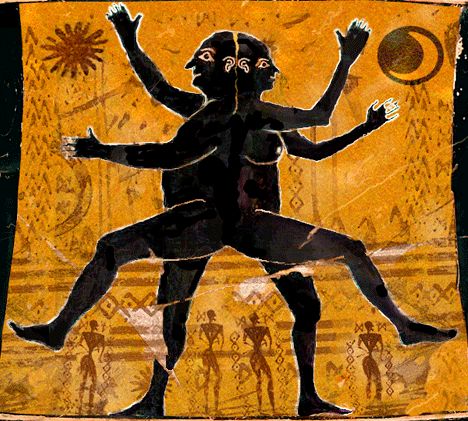 Since then, the offsprings of the half-man/half-woman, which made up most of mankind, sought to find their other half to finally be complete and continue their quest of reaching the heavens. Now isn’t that romantic? All stories of twin souls and twin flames might just be about the separated androgynes longing to find their other half and become one again, as in the ancient days. (Image on right is the ancient androgyne in the process of being separated, on a Grecian vessel from around 2,400 BCE)

In Enuma Elish, the giant Marduk entered Tiamat’s womb unknowingly, thereby making Tiamat a man within a woman, or a kind of androgyne. Marduk was triumphant in redeeming the treasure of power by killing Tiamat, who hid this treasure in the oceanic depths.

The Androgyne was celebrated not only in alchemy, but in other cultures and religions as well. An androgynous god is tasked with procreation and associated with the myth of birth. During the New Kingdom in Egypt, there were androgynous goddesses who had the power to create. Now this was far from the norm of goddesses being only concerned with fertility and abundance, because the power of creation has always been attributed to the primordial male gods. These creatrix-goddesses were equipped with an erect phallus and often were lioness-headed.

From the beginning of time, man has conceived of his creator as being two-gendered or neither woman nor man. These asexual deities included 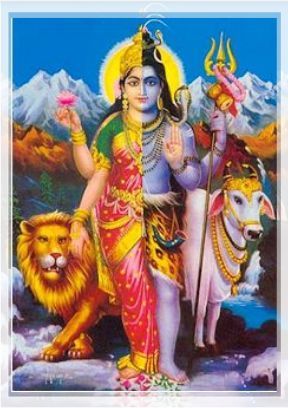 Zeus and Heracles, whose masculinity is tempered by wearing women’s clothes

Agdistis, offspring of Hera and Zeus and who is also called Cybele

Lan Ts’ai-Ho, the Chinese Immortal goddess who has a male voice

Shiva, who shared his body with Parvati or Shakti (image on left)

Quetzalcoatl, who governed over the laws of opposites and the “uniter” of separates

Zurvan, the Persian god of eternity, infinity, light and darkness

Baal, who was also represented as Ishtar or Astarte

Astarte, who governed wars and was often depicted with the masculine pillar

Aphrodite, who is represented with a beard in Cyprus

Amaterasu, the Japanese sun goddess who is often painted with strong features

Angels, who are illustrated as asexual, with soft facial features but muscular bodies

The Tellus Mater or the Primordial Mother, who was illustrated as possessing both sperms and eggs

We can also see this man-woman combination in the Egyptian creatrix-goddess Neith, who was said to have woven the world into existence and whose hieroglyphic name included an ejaculating phallus. She has also been described as more male than female in later Roman texts. The Nile god Hapi was often depicted with heavy breasts and a rounded belly to indicate fertility, a typical power of the primordial goddess.

The Rebis in Other Ancient Cultures 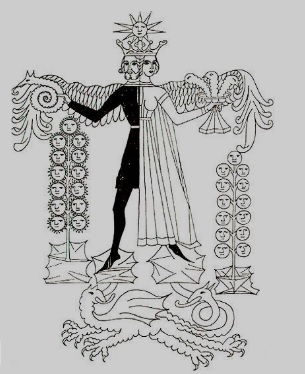 The Two-in-One Being figured in almost all the ancient cultures. Ancient people who used it as a symbol included the:

Above, the Alchemical Man-Woman from the circa 1530 medieval texts of Michael Cochem.

The ancient people found expressions of Androgyny in:

Adam, the first man, who contained the feminine principle Eve in his rib.

Apollo and Artemis as inseparable twins with Juno’s Serpent representing the menstruum.

The Roman God Mercurius, who was able to cross over borders between heaven, earth, and the underworld

The neutron, with Sulphur as the proton and Mercury as the electron.

The Phoenix, the generally masculine symbol which acted like a mother by conceiving by itself and being born of itself from the ashes.

The sexual act joining man and woman and eliminating the distinction between the sexes.

The Prima Materia, which encapsulates the seed of perfection and represents the beginning and end of all creation.

The erect or menhir stone, the symbol of Mercurius.

The flower, which often produces both sperm cells, ovules and a seed by itself.

The Star of David, which has the upright and inverted triangles.

The Chinese Dragon, which is at home in air, land and sea.

The Chinese unicorn or Chi-lin

The Androgyne in You and Me

According to Carl Jung, one of the greatest interpreters of symbols of all time, each of us is an androgyne of sorts. The dilemma is that our female and male personalities are not in equal measures.

For example, a woman carries latent masculinity within herself, an androgyne manifesting when necessary.

She may consciously or unconsciously bring to the surface such masculine or dynamic characteristics such as aggression, extraordinary physical strength or speed and other qualities that are manly, but she is first and foremost a woman. At the same time, a man has in himself the capability to be soft and yielding, qualities that are associated with femininity, but these, too, may manifest rarely or only as needed. 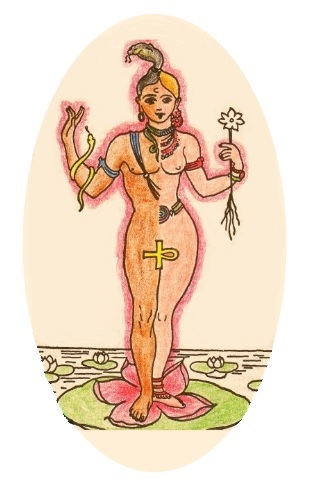 Ancient seers as well as modern scholars, psychics and psychologists have declared throughout history that man has always felt incomplete despite the achievement of victories and wealth. Psychologists were able to pinpoint the beginning of this feeling of ‘incompleteness’ from puberty, when ego and sexual organs develop and thus emphasize one’s masculinity or femininity. This meant that one is either a man or a woman, and no longer like a child who is in touch with both the feminine and the masculine, and oblivious to gender and its accompanying responsibilities and roles.

The androgyne represents the interplay and partnership of the visible with the invisible. The half-man/half-woman signifies completion, the ultimate dawning of truth, knowledge and love.  It embodies the joining together of the opposites male and female. It is the capacity for self-becoming, the recognition and balance of both the male and female in one person. It may also mean that we must have this completion within in order to be free from insecurities and dependence on another person, or seek the Yin or Yang we lack in the opposite sex.

I hope this page brought you enlightenment on the deeper meaning of the Androgyne. if you would like to see a more modern rendition of androgyne, you can check out the necker cube here.

Read about Androgyny as a symbol here.

OR return from Androgyne (this page) to the Alchemy Symbols page.

Want to know more about symbols? Go to the Symbolisms home page.